Platelets play a key role in hemostasis, initiating and propagating thrombosis (1). Dysregulation and inappropriate activation of platelets occur in a wide range of serious age‑associated diseases, including stroke and myocardial infarction, whereas impairment of platelet functions results in bleeding disorders and bleeding risk during surgery.

Mature, anucleate platelets contain not only messenger RNA transcripts as well as the necessary machinery to conduct translation, but also microRNAs (miRNAs), which regulate translation of proteins (2). MicroRNA expression profiles within platelets strongly correlate with platelet function and reactivity.

During activation, platelets release microvesicles that contain microRNAs, which might be taken up by other cells and regulate the recipient cell´s mRNA profile and gene expression. Platelet-derived microRNAs (thrombomiRs) can be detected in cell-free blood, i.e. serum and plasma samples. The encapsulation in extracellular vesicles stabilizes microRNAs, allowing robust detection in frozen serum and plasma, even after storage for several years. The concentration of thrombomiRs in cell-free blood is known to decrease upon platelet inhibition or increase upon platelet activation. Therefore, the quantification of thrombomiRs is useful for the diagnosis of platelet-related disorders and for monitoring the pharmacologic effects of platelet inhibitors.

Commonly used ex-vivo platelet function tests such as light transmission aggregometry (LTA), VerifyNow® or PFA-100®, require fresh blood and specific agonists that trigger platelet activation via one specific pathway. For this reason, they clearly lack standardization and their analytical variability may induce misinterpretations (3). Therefore, circulating microRNA, plasma and serum microRNA profiles may find use in clinical practice as novel biomarkers and markers of prognosis and treatment response. 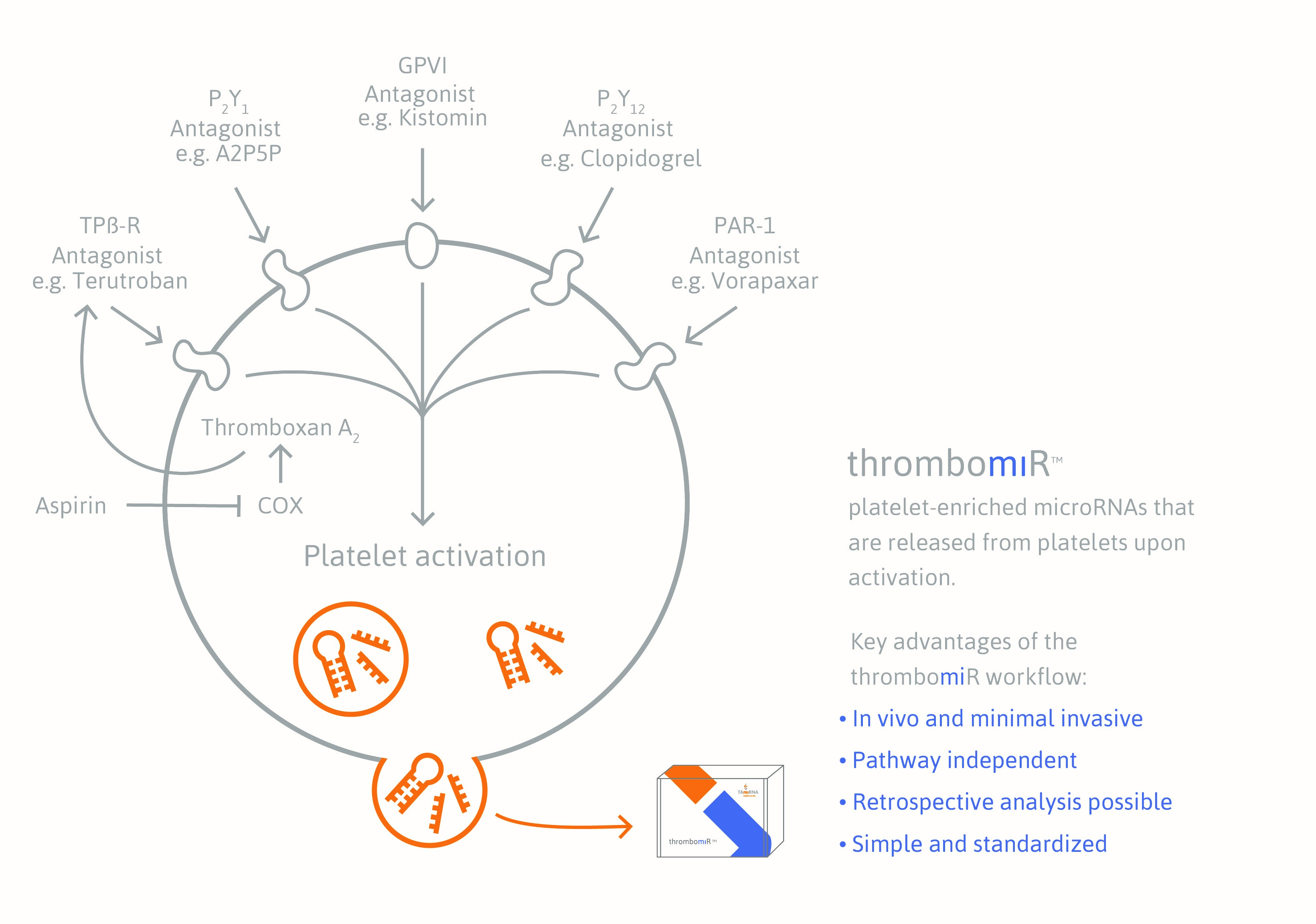 Platelet microRNAs are a novel and complementary measure of platelet function, because

Overall, this simplifies the assessment of platelet function, which is important for determining the platelet status of a patient to assess the bleeding risk and response to therapeutic platelet inhibition.

measurability
Circulating microRNAs can be quantified in serum as well as plasma samples using quantitative PCR. This gold-standard method is reliable and can undergo technical validation. However, in order to be successful, a well-characterized and standardized protocol must be used. TAmiRNA has developed a robust workflow and offers qPCR Kits together with software solutions for circulating microRNA analysis.

validated biology
Numerous studies have by now validated the regulation of thrombomiRs® (and therefore platelet reactivity) in patients with acute coronary syndrome, type-2 diabetes and after anti-platelet therapy. In the following a few examples for so-called “thrombomiRs®” are given:

decision support
The thrombomiR® kit allows users to analyze 10 distinct platelet-derived microRNAs with specific biological functions and clinical utility. Therefore, the thrombomiR® test reports a novel measure of in-vivo platelet function, that is independent of a specific activation pathway. The thrombomiR® software simplifies the analysis and interpretation of qPCR data.